Ratatouille is such a versatile dish – there are more ways than can be counted to do it nowadays and everyone swears by his/her way. The traditional  way takes takes far too long(for me in any case!) and the vegetables are too soft and juicy to my taste. So I do it the quicker and crunchier way and so far, nobody has complained…on the contrary…everybody finds it fresh and enjoys the crunchiness still present and the appearance pleasant. It is a perfect little vegetable starter for the festive meals that await us! 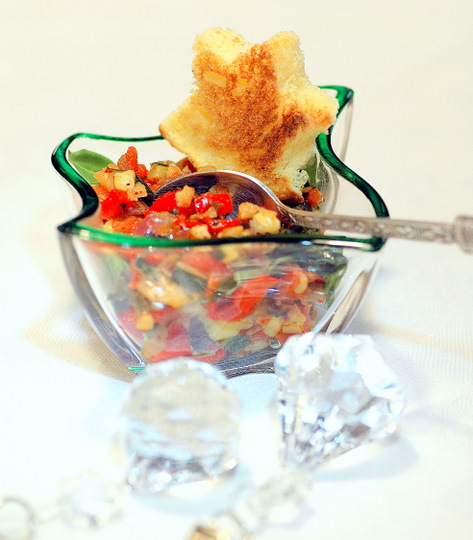 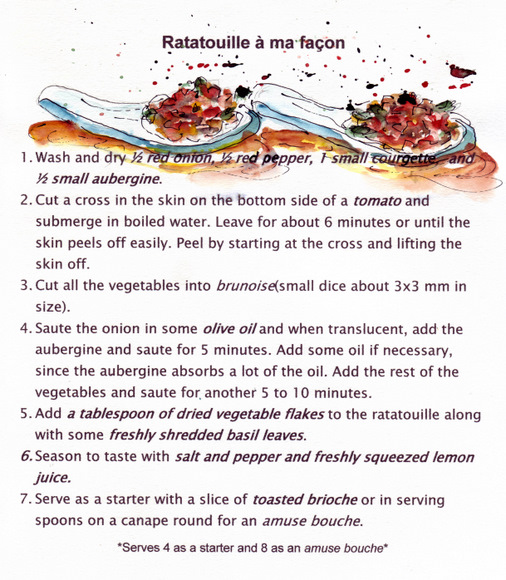 I don’t have any fond feelings aboutf scissors, in fact, I pretty much associate them with pain and blood, of which I have first hand experience.

But then again, if I think of life without them..?

I had a pretty little old one from my mother which I kept in my handbag and forgot to take out before we had to board at the airport.  I still have another one left, a very ancient model, frequently used by her and even though it lacks performance, its beauty stays unsurpassed. No psychedelic colored plastic in sight and the handle shows signs of hard use and yes, the blade is full of rust spots, but the lines are sleek and graceful and the grip allows for good comfort. Just a simple but beautiful, old pair of scissors from my childhood, one that came from my mother’s sewing kit and is now not so much a utility as a connection to the past.

Like everybody else, I also have  scissors everywhere throughout the house. In the bedroom.. a small pair for removing labels or a loose thread here and there. In the bathroom for cutting and trimming hair, my husband still only trusts me to cut his hair. In the atelier where hundreds(well, almost a hundred!)have to cut anything from plaster to paper.
Then there is the handyman that cuts just about anything, although I don’t believe in this all-round-scissors. I want one for every purpose – one for cutting hair and one for cutting paper, another for cutting plastic and one at close hand when I can’t find the hammer, or the screwdriver or the can-opener…The sewing kit has a few of its own, and to my dismay, the huge fabric scissors is in high demand at Christmas when all the others scissors have magically disappeared.
The kitchen is an interesting topic. I have yet to figure out the system there – one for every task? But that would leave neither time nor place for anything else in the kitchen!
My pièce de résistance is my  giant, heavy pair of fabric scissors that I acquired years ago with every cent we owned and woe to the one who dare use it for anything else! It has never been sharpened and after almost 30 years still cuts through a piece of fabric like a hot knife through butter!

And let’s not forget the garden scissors…those very important pruning tools and the small scissors for bonsai that I use to cut string for tying and staking in the garden. Do you keep your garden scissors clean and oiled? Not? shame on you!! the same goes for cutting flowers for the house…clean them, oil them and they will serve you a lifetime.

It seems I can actually conjure up some images of pleasure and so maybe I do have fond memories of scissors after all….